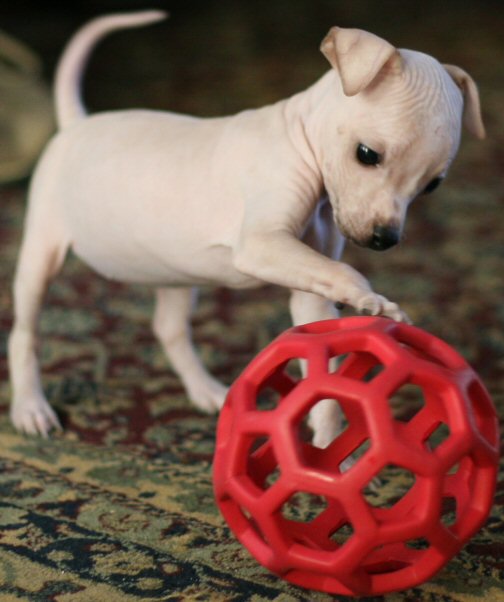 Maggie and I have been in new puppy negotiations for quite some time now. I’m not 100% exactly sure when I lost (I was on the “against” side) but it’s clear that I did (see Kali Arrival Notice.) Yes, Niko would enjoy a friend. Yes, puppies are cute and fun. Yes, it’s not much more work to care for two puppies than just one.

Now that a full week of puppy-dom has passed, I’ve got a few post-puppy-arrival arguments that I could have used to strengthen my position:

So, I struggle through haze-filled days and spend lots of time on the back porch in the dark singing poop-encouragement songs.

But Maggie is right. Kali’s a lot of fun. The Kali vs. Niko the Giant fight scenes are hilarious and growing more frequent. She loves to chase the tennis ball although she’s a little unclear on the bring-it-back part of the game. We’ll work on that. And, did you know that, just like pythons, puppies can unhook their jaw bones to fit objects of comical size into their mouths. Picture in your mind a pint-sized puppy carrying around a full-grown tennis ball. I’ve seen it! Hopefully I can catch a photo to prove it.

She has impressed us with her puppy smarts. She knows which door needs to open to relieve the bowels. She also knows that for the door to open she must stand near it and wait. Fantastic. Her most important puppy lesson thus far, however, is that the toy that tastes the best is the one in Niko’s mouth.

Niko is adapting slowly. She keeps a Do Not Disturb sign posted at night and in the early mornings. But Kali, with her still developing brain, hasn’t figured out how to read quite yet. So Niko tries to gently educate with growls and barred teeth. Blood has yet to be drawn but, personally, I think Niko is putting up a tough girl front. I know she enjoys the rough-housing as much as Kali does. It’s like a G-Rated Wild Kingdom around here. At least between naps, eating and pooping.