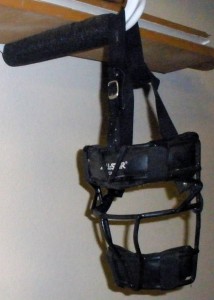 Duality of vision.  At least that’s what I’m calling it.  As of May 4th last year, along with my “new perspective,” my way of looking at things, physical things, has changed.  For example, driving into my garage every day I see Maggie’s catcher’s mask she used to wear while playing softball.  It hangs just inside the garage door right where I park the car.  When I see that mask, I think of the soft plastic that used to touch her forehead, the grill she used to breathe and taunt through, the strap that used to get tangled in her hair…. Such a simple object yet so filled with the richness of her experiences, the richness of her.  I also see it as a creepy object a dead person used to wear.  Both perspectives exist simultaneously, separately and incongruently in my mind.  One of those perspectives exists only in my heart.

Because of what I’ve experienced, death has lost its cold hard edge for me.  It doesn’t scare me anymore.  I have no fear of dying.  It doesn’t give me the chills or turn me cold.  All that which was very scary before has now been replaced by a much different feeling.  Instead, death seems to me like it was that day with my baby the day It happened.  It’s warm, soft, peaceful and relaxing.  Death has now been humanized and even maybe romanticized.  And it’s certainly nothing to fear anymore, not for me.  How could I fear that which brings peace?  How could I fear that which might bring me back to my baby?  I can’t and I don’t.

Lord, I can feel my mother’s blood pressure rising as I type this.  Chill, Mom.  No, this is not my suicide note.  I hope that most who read this know me as quite stable yet prone to over-intellectualizing, even about that which might be considered risqué.  I am just trying to describe yet another interesting change and/or step in this journey, one I could never have imagined, like so many others that came before it.

I’d guess that few others around me share this duality of vision.  Instead, the creepiness factor colors all that death touches.  The softness I see and feel and experience isn’t there.  The cold, bitter harshness of death is.  I’ve seen it.  I’ve seen it in the eyes of people who have come to the house.  I’ve seen it in my friends’ eyes when I tell them (which I rarely do, unless they specifically ask) where Maggie’s ashes are (beside me on the desk as I type this note.)  I’ve seen it too, when potential new friends look at me when I say “last year, in May” after they ask “when?” which is typically followed by an awkward pause in the last conversation we share.

I’d guess that other widowers or widows have different views of death than I do.  I’m certain many of them still see death as the enemy, as evil… like it stole away their sweetie.  No doubt, for their situation, they are right.  Oh, I see it so amazingly differently.  And if being a widower didn’t alienate me enough, my new and somewhat non-conventional views on death surely finish the job.

7 thoughts on “My New View on Death”