Why today, I’m not sure.  But today was a day of amazing… well… Let’s just say that it’s been a long time since I’ve felt my wife’s loving kisses.  As a well-educated, rational man I try not to look too far for things that might could be interpreted as messages from, you know, (insert creepy echo sound here) The Great Beyond.  I suspect that children would argue, were they equipped with such skills, that our grown-up filters get in the way of seeing the magic that’s right in front of our eyes every day.  Well, today, I was presented with something I find difficult to easily dismiss.  Fortunately, about such matters (a relatively recently decision, like, for the last 415 days) I’ve been more open than closed, accepting than judging, more faith than fact.  Today just took my breath away.

I’m not a very good gift giver.  I can’t say I ever have been.  But, as every man has been brainwashed to understand, women love the diamonds.  So I gave Maggie the diamonds.  She had an amazing set of earrings that I gave her early in our relationship.  I followed that with a necklace that she was rarely seen without.  After our engagement day in the snow, her finger sparkled with a dazzling diamond accompanied by a symphony of supporting diamond stones.  And on February 28, 2004, that dazzling diamond was joined by a chorus of others in the form of a wedding band.

The centerpiece of her engagement ring was a wonderful diamond I hand-picked that was a magnificent specimen.  It, of course, like most diamonds, wasn’t perfect.  It had various minor occlusions and she used to gaze into that stone and contemplate her Solar System, like she called it.  She knew and loved each occlusion like she knew her own hand and would spend untold hours watching the sparkles from the ring dance in the sun.  There is absolutely no possible way I could have, like I had secretly planned for years, replaced that diamond with a nice glass copy.  Oh no.

She loved that ring and she told me often.  At the risk of implying my sweetie was materialistic (she so was not) I wondered how it could be so important to her, as I’m sure every confused man does and frankly, it doesn’t really matter.  She cared for it daily and played with it and looked at it.  It was rarely, if ever, off her finger.  Well, that beautiful ring had been off her finger for a long time now.

Yesterday, for reasons I can’t share because I don’t know, I gathered them all up, all the diamonds and put them into a little box I found in her drawer.  I can’t imagine what might have been in that pretty little box prior but it had three perfect slots for our three special rings: my wedding band, her wedding band and her engagement ring.  I carefully placed them in their spot in the box, added the earrings and necklace, closed it up and carried it around for a bit, occasionally peaking inside just to see how it felt.  It was weird. 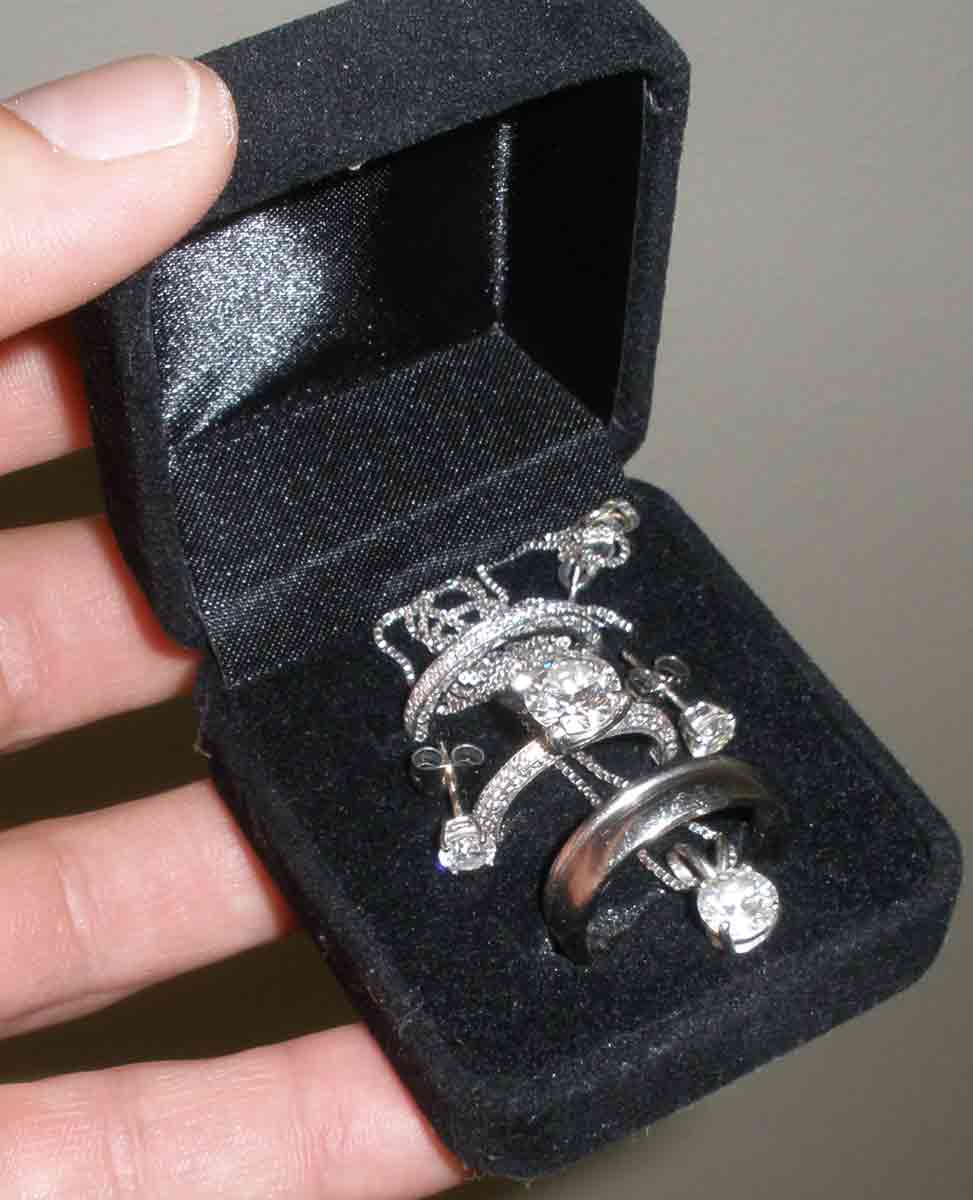 Then I headed to my bank where I had two tasks: open a safety deposit box and close Maggie’s estate account.  Closing the account was pretty straight forward and painless.  Opening the safety deposit box, while busied with various key and signature protocols, was easy too.  Peaking at the rings one last time and putting that little box into the bigger, more secure box was not.  But I made it through ok.

Then I got side-swiped.  I think he told me they have around 10,000 safety deposit boxes in that bank.  From the ones available, he randomly picked three envelopes containing keys (he said that sometimes the keys don’t work.)  From that, he randomly picked one of those envelopes and from that envelope he found keys that worked… on box 02014.  02/14 is my birthday.

I try to not to look too hard for messages from my sweet wife.  To me, it’s just kind of silly and I’ve got better ways to spend my time than chasing unicorns, no matter how much I want them to exist.  I’ve heard people saying things I just consider ridiculous about such things and while I never voice disagreement I don’t really buy it, either. Basically, I don’t deny anything but I don’t fully submerse myself in it, either. Call me whatever but it’s just not my bent.

Maybe she really is watching over me.  If so, then she knew how tough this big step was and maybe this was her clever little way of telling me “It’s ok.  You’re doing great.  Move on.  You are doing the right things. I’m right here walking beside you even though you can’t see me. And I’m still holding your hand.”

It’s been a long time since I laughed and cried at the same time.