I’ve heard it said and I’ve seen the look in people’s eyes.  “When are you going to let all this go and move on?”  I stopped responding to that question.  I’ve learned that any amount of explaining I do is wasted air and just makes me look like I’m a) in denial, b) clinging to the past, c) looking for sympathy.  I, however, believe I’m doing none of those (denial, what?)  Gosh, I sure wish I could just click an Easy button and be done and move on.  Reality is that when big, bright stars explode the energy released sends ripples out far into the galaxy.  Maggie was the brightest star I know.  My galaxy will be feeling those ripples for a long, long time.

An example of why I haven’t “let go and moved on” is something totally out of my control.  At least once a week, sometimes more often I get poignant reminders in the mail from Humana or from TrailBlazer*.  Just today I got my latest letter from Medicare showing our doctor’s appointment at MD Anderson from February 5, 2009.  Just in case you missed that, FEBRUARY 5, 2009 was one year and five months ago. Better still for helping me make my point, it shows that the claim filed for her visit has been denied because “This provider was not covered by Medicare when you received this service.” (That’s what the little ‘a’ means on the form just to the right of each claim – “not covered.”) 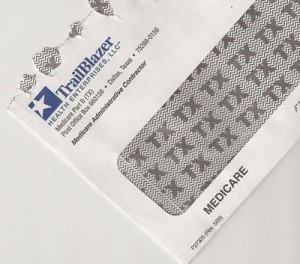 * TrailBlazer is a name I hope you don’t recognize.  That’s the nifty little name and logo that’s on the notices I get from Medicare. Why it’s not “Medicare” I don’t know.

Today is day 447.  Given all that’s happened (and continues to happen) I think I’m doing a pretty good job of “letting go.”  But moving on, heh.  I suspect that trying to meaningfully discuss “moving on” with the uninitiated probably compares with explaining how it feels to be pregnant to a guy.  Good luck with that!