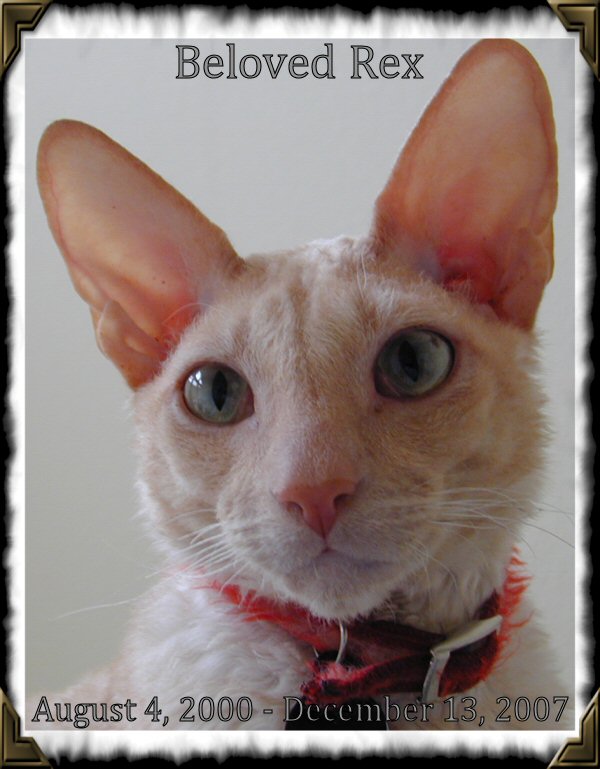 Today, my little buddy Rex died by my hand.  Some might say he died a few weeks ago and today was finally the day I let him cross the Rainbow Bridge but, from where I sit, today is the day his little heart stopped beating while his head laid in my hands.  The decision was made a few days ago that it’d be best for him.  He was clearly not well, physically or mentally.  After a sudden infection ravished his body, taking with it his eyesight, sense of balance and smell, he just never came back to center.  A few little hints of Rex were there but maybe they were but muscle memory or hopeful delusions of a loving father.  Maybe my friends were right.  Maybe he did die a few weeks ago.  Well, today I helped him cross over the Bridge.

He had spent the last few nights wandering blindly around the house, no doubt searching for some ghosts in his own memory.  After a few incidents of a lost kitty and surprise wet spots around the house, I had erected a fence encapsulating his bed, litter box, water bowl and food bowl.  It was obvious that last night he was especially busy with his mission, circling endlessly going nowhere but determined to get there.  Trapped in his prison but still determined to march, he would alternately step into his water bowel and then, eventually, into his litter box, building up layers of wet gunk so thick that his little toes were uncomfortably splayed out making walking even more difficult.  From the stripes of caked-on litter along his front legs and chin it’s obvious he had done some face-planting following the same water bowel/litter box pattern.  He was a sad sight for my morning eyes.

It’s not hard to explain why I didn’t call sooner.  I was hurt, or scared, maybe both I suppose.  How odd – a fear of death and dying.  Maybe there was even a little association with some other parts of my life.  But, seeing this morning’s scene, I finally called the vet.  My stomach sank when they said “bring him in at 1PM.”  Thus began my day filled with somber ritual.

First, I got Rex out of bed to give him a much needed, hot bath.  He didn’t really participate but, in my mind, he was enjoying the care.  He sat listless in the sink while I carefully cleaned off the caked litter from between his toes and out of the matted, orange fur on his bony legs.  All of this I gently, lovingly washed down the drain.  It’s like he knew I was trying to help.  I told myself during the bath that he was loving the hot water.  Honestly, I’m not even sure he knew he was wet.  But somewhere in that little kitty head he could feel my love.

Next, I wrapped him in a towel and we sat, gently rocking for some time.  I talked to him, thanked him for being so sweet for all these years and listened for any reply.  Occasionally I’d hear him wheeze and label it a purr.  I wrestle with whether my self-delusions are helpful or hurtful.  But we enjoyed our time together, sitting quietly in the living room.

I gently placed him on the carpet and began to gently comb his coat, a favorite pastime of his.  Despite any hint of either pleasure or displeasure, I made certain I carefully brushed where I knew he liked it most: on the side of his little head, under his chin, on the sides of his stomach.  It was a challenge to keep the comb from riding roughly over his protruding spine and hip bones.  Days of not eating had turned his plump body into a loose sack of bones, skin and hair.

Before when we’d brush Rex, the brush would quickly fill with silky-soft, ultra-fine pink and white hair.  This time, however, not much hair gave in to the comb.  The hair that did was tougher, thicker, and couldn’t be called silky.  But we brushed until his naturally wavy fur became more uniform and less messed.  All the while he just laid there, occasionally turning his head or alternating sitting or laying.  He was cool to the touch and mostly silent, except for the occasional wheezing.

I put a new towel in his bed, turned up the heating pad, and sat him in.  As he very slowly laid down, I covered him up with part of the towel.  Maybe he could get a little heat, I thought.  I spent the next few hours or so cleaning up the mess he made last night trapped in his blind, alternating wet and sandy prison.  It was a wreck but my cleaning felt like a labor of love.  Odd, because I know he didn’t care.  I don’t even think he knew I was there.

During breaks, I presented him with yet another last chance to eat his favorite kitty food.  As has been the recent pattern, he showed more irritation than interest with my insistence that he at least try the food I was sticking in his face.  He even stood up to show his mounting dissatisfaction.  So, sadly, I quit trying.  Where there’s no will, there’s no way.

We spent the next 30 minutes with each other on the living room floor.  Him, laying listlessly listening to me tell stories about when he was younger and me, well….  Finally, the time to leave had come.  I wrapped him in a towel and headed out the door.  It was 12:55.  Someone was procrastinating.

When I walked into the garage I noticed that the clouds had parted inviting a spot of sun shine onto the driveway.  Rex always loved stretching out in the sun.  I had spent many a moment laying in the floor of our bedroom – Maggie, me, Rex and Zues.  Maggie’s siren call “come lay in the sun with us!” was hard to resist.  We’d all four (and when Niko arrived, five) would laze around basking in the heat.

So I took Rex to enjoy one last moment in the sun.  It was warm to my skin but Rex didn’t even seem to be any more impressed with the sun than he was with his earlier bath.  I guess the moment was more for me than for him – our last sunbath together.

The drive to the vet was the longest, slowest drive I’ve ever taken.  He was in my lap, sitting quietly.  Finally, sitting in the parking lot, he stirred just a little and gave lose a weak meow as if to say, “I still hate riding in cars.”

I was greeted and shuffled into the room where It was going to happen.  The nice assistant was patient while I sobbed out the information she needed.  I was in sad shape.  I‘ll bet they get sick of that.  Rex, however, didn’t seem to care.  He was stretched out on the towel on the examination table ready for what ever may happen.  Finally, the vet came in hiding the needle carefully out of my sight.  It was a funny little game, one maybe they train you for in vet school.  “Don’t let them see the needle with the death fluid in it!,” I’m sure they’ve been instructed.  Like I said, a funny little game.

She said that I was doing the right thing.  And she knows that it’s hard.  Blah, blah, blah.  Then they gave me a little booklet to help me deal with my grief.  Ha!, I thought, I bring you a loved one and you trade me a booklet.  Life is just funny sometimes.

She explained that she’s going to give him a shot in his leg that will cause It to happen.  And, she was clear to point out, It will happen very quickly – seconds.  Sometimes, she said, people are surprised.  She went on to say that Little Rexy’s eyes will stay open so don’t be alarmed.  And there’s a chance that Rex’s little muscles might twitch after It.  But he won’t be in any pain and he’ll be in a better place soon.

We traded places, me in front holding his head and her in the rear with the scary needle with the death fluid in it.  He resisted being rolled over, like he always has, but he just didn’t have much fight in him.  I held his little head in my hands while she found the vein.  I talked in low voices, told him I’m sorry and that I loved him soooo much.  I hope he heard me.

The vet said that it’s time and I gave her the nod.  Rex lifted his head, gave one last little meow and went limp.  It was done.  She checked his heart and told me the obvious.  I stood there and cried holding his little limp head in my hands.  After an eternity I wished him a good journey over the Bridge and told him I’d see him soon enough.  I’m not really sure how I made it to the car but there, safely in my pseudo-privacy I sat using up napkins for quite some time.

I chose to have him cremated.  Next week I’ll get his ashes.  While I haven’t decided what to do with them yet I do know that he belongs outside.  Somewhere where he can laze around in the sun and wait for us to join him….

One thought on “Goodbye, Sweet Rex”